This was the question that a Christian asked me earlier this morning via Facebook but one that I fear was more of a statement than it was a genuine enquiry. 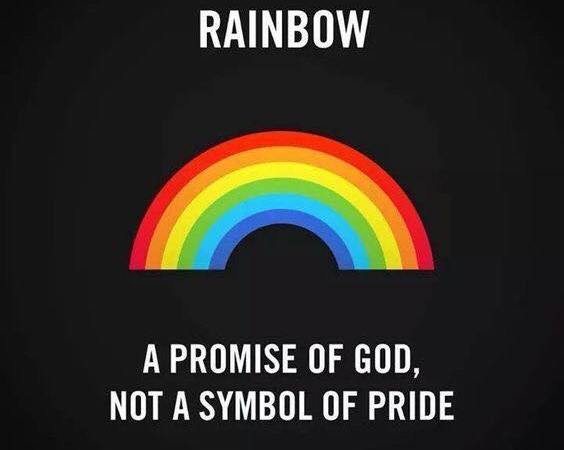 They’d seen the image, above, and, evidently offended, wanted me to know that they believe that my objecting to LGBT narratives was judgmental and hateful.

Voilà! Here we have the most prominent counterfeit narrative coursing through the veins of culture as I type:

If one does not agree with the LGBT definitions of ‘inclusion’ and ‘equality’, of sexuality, human ethics, child protection (amongst other things) as defined by politicised agendas, one is automatically hateful.

Tragically, this counterfeit narrative is so pervasive that even some Christians would profess it to be true.

Perhaps asking this question on Facebook (making this statement) reveals more of the condition of your heart before God than you think it might.

Question: ultimately, what is the most elementary position of a person of Christian faith? Answer: submission to Jesus Christ as Saviour and Lord (Romans 10:9).

This means you’re submitted to the Word of God because it’s only via the Bible that you’re called a child of God in the first place and that His initiating love is revealed to you.

If we call Him “Lord, Lord!” at the point of our adoption but then “Fool! Fool!” at the point at which His Lordship challenges our (crucified) flesh, when all is said and done, is He really our beloved Father? Or are we just ghosts grumbling from the dead?

Despite the raging, blindingly-contagious narratives of our time, as believers, you and I don’t get to set conditions, do we? We don’t get to pick and choose when to believe and when we don’t, do we? Or what He says is true and that which is not…

When hands are on hearts and knees are bowed down, isn’t it true that we’re all-too-often submerged in the locust-commentaries of our culture – bolstered by the unrighteous laws of our land – to such an extent that we’re simply rendered lukewarm and oblivious? One might say, fast asleep.

But, we’re not called primarily to preach “inclusion” or to wave an “equality” flag or bang a “human rights” drum; we’re called to communicate the truth of the Bible and the inclusion-trumping reality of the gospel, unto transformation.

Christian, you know that the Bible makes it abundantly clear that, however offensive, anti-cultural or unpopular, and regardless of what Timothy Farron may or may not say, sin is a reality. Every Christian believer knows this to be true and feels it as an elementary kingdom-truth as basic as ABC.

It’s at this exact point of revelation that you stood up, lifted your shaky voice and gave testimony in your little sea-side church, through the waters of baptism, proclaiming to all heaven and hell, that you had been born again.

How do we ever come to a point again of arguing with what God says? The cosmic hypertrophy of pride – that’s how.

We have unwittingly slipped back from God’s law of “Child, if you will…then surely I will” to ‘No way, God…that is an offensive teaching..” (See John 6:60).

But either we submit or we don’t; either we have submitted or we haven’t.

Are You Saying God Feels Ripped-off?

God doesn’t sulk, huff and puff or recharge His smiting-bag of lightning bolts.

But He is a Person.

Therefore, He does grieve deeply when sin is called “not-sin”, especially by His sons and daughters.

In God’s wisdom, quite literally, God gave the rainbow to you as a wonder of creation, the crowning glory of the Genesis flood narrative but also a personal promise of your own salvation and sanctification  (you can read this for yourself in Genesis 6-9)

Roman men made the cross of Calvary but the rainbow is creation’s own gospel symbol, the antithesis and antidote to human pride, sinfulness and folly. It’s the symbol of a new, holy covenant and God’s promise never to exterminate the human race ever again – though that’s what we deserve – but to instead flood us with tsunamis of grace upon grace.

This gospel reality of the rainbow is infinitely more than metaphor or poetic device; it is creation’s own groaning for the full-light of Day.

Whether by Christians or non-christians, when the rainbow is hijacked by culture and sacrilegiously misused to evangelise for anti-christian causes, it’s as though it’s of no more importance than Zippy, Bungle and George.

However, God gave us the rainbow to remind us of His provision of personal grace in the face of personal sin. How dare we invert it back at Him as a symbol of our corrosive pride all the while singing delusionally in the rain of His benevolent mercy?

He will grieve but He will not be mocked. (Galatians 6:7).

Whether to new “definitions”of “marriage”, sexuality, gender or of what constitutes nuclear family, whether to the sanctity of life in the womb or the value placed on a person in the corridors of a euthanasia clinic, conscientious objections to the narratives of our time, based on faith in the Bible and relationship with Jesus Christ, is ultimately the most loving objection that could ever be made.

Objecting to LGBT narratives and agendas, definitions or campaigning, is no more unloving than a Keeper of a broken Lighthouse taking personal responsibility for the disorienting storm by climbing to the lantern room and manually lighting a fire.

“This (LGBT agendas) is a weapon for a very authoritarian, very intolerant set of attitudes masquerading as compassion…”

Church – I love you – for the love of God, please wake up!